Are You Smarter Than a Berkeley Student? 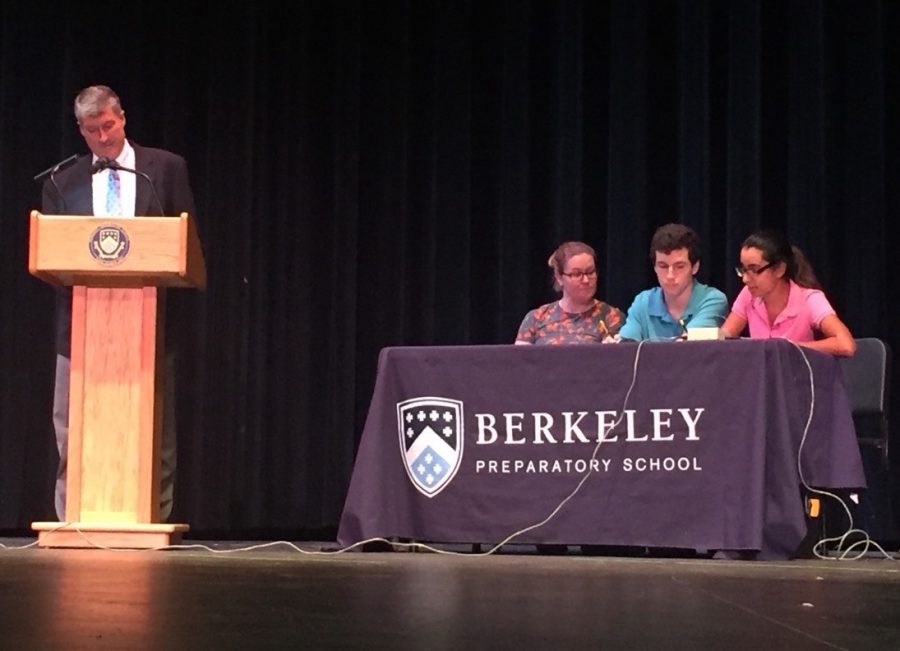 HEADMASTER KEEPS FINALISTS IN CHECK: Headmaster Seivold acted as the MC during this year’s Trivia Tournament, but making introductions and delivering questions was not his only task. Seivold also did a fantastic job of controlling the rambunctious competitors, as they attempted to beat each other to the buzzer.

Name this NBA center from Africa who is tied for the tallest player in NBA history, standing at 7 foot, 7 inches. The answer is Manute Bol. Did you know that?

For most people, the answer is a resounding no. This year’s Fall Trivia Tournament, run by Berkeley’s History Bowl Club, showcased many difficult questions just like the aforementioned one. The tournament was set up with two sides in the bracket, having the best team compete against each other for the championship. For some, this  trivia tournament was simply a fun activity to do during lunch. However, for others, the competition was a life changing event, where moving up the bracket meant a new sense of pride and confidence.

After watching the tournament, the secret to winning is clear and the thought process for answering difficult questions is actually not as complex as most people think it is. Champion of this year’s trivia tournament Rohan Singh ‘17 said that winning is simple if you “buzz in quickly if you think you know it.” Singh also said that it is very important to “be strategic,” meaning that when answering questions, one must take into consideration what the question has said and also what sort of answers could possibly coincide with the questions.

Skill and knowledge is just as important when answering both difficult and easy questions. This skill can be obtained by watching shows like Jeopardy. Singh said he used to watch shows like Jeopardy all the time because for him, it was fun to test himself and become more knowledgeable about different aspects of history. Trivia is a test of not only just knowing the main idea, but also the  details behind the facts.

The History Bowl Club successfully hosted their trivia tournament by challenging Berkeley students in a fun and captivating manner. If you didn’t get the chance to sign up for the fall tournament, have no fear because the spring tournament will surely be just as challenging.