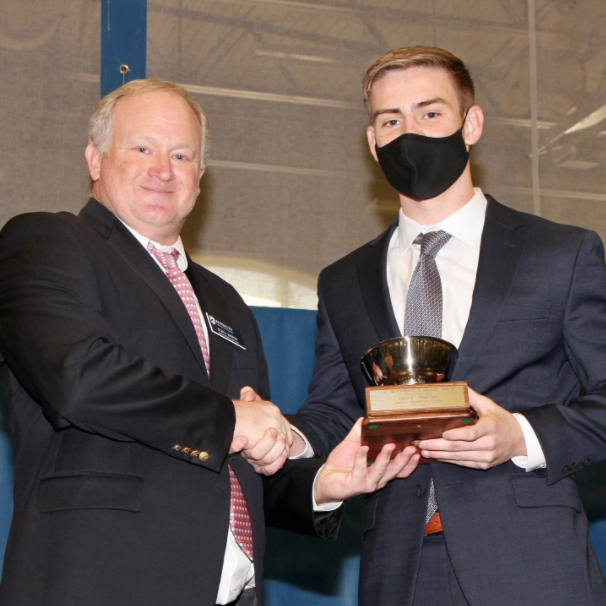 NEW BEGINNINGS: Upper Division Director Ryan Jordan congratulates Jared Watson ’21 for being an integral part of the Berkeley community and continuing his journey at Emory University.

Each year, Upper Division seniors are recognized for their excellence in the arts, service, fellowship and academic pursuit. Two of the highest honors a senior can receive are the Betty Bruce H. Hoover Award and the Headmaster’s Trophy. The Fanfare sat down with recipients Jared Watson ’21 and Charlotte Graham ’21 to discuss their senior year and reactions when they won their respective awards.

“I was ecstatic when I won,” Watson said.  “It really meant a lot to me that the teachers felt I best deserved the award.”

As the Student Forum president, Watson took the initiative to communicate and maintain connections within the Berkeley community. Working a plan to broadcast the daily convocations live into the classrooms, he was not deterred by the tumultuous year the virus has brought upon the school. His calm and steady presence during uncertain times proved him to be “a staple of the Berkeley community” this year.

“He is an amazing representative of the senior class, and our student body,” UD Division Director Ryan Jordan added.

Last spring, Watson battled a serious medical condition. During his junior year, Watson was diagnosed with Lymphoma, requiring him to undergo both surgery and chemotherapy. As a member of the football team, Watson worked very hard to return to his team. Being weak from the treatment, he worked hard to put weight back on and get back into shape for football season. Outside of football, Watson had to get scans throughout the year to check up on his recovery process and ensure the cancer did not return.

“I found it difficult paying attention in class while waiting for these scan results to come back,” Watson said, “because if they came back positive, my entire world would be turned upside down again.”

Even through challenging times, his priority remained making an impact on the community and lives of his peers. He persisted in his quest to remain an integral part of the football team and student body, all while battling Lymphoma.

“Going through cancer last year has really made me appreciate school throughout my senior year,” Watson said.  “And I am really thankful to have been able to participate in all the senior activities healthy.”

With this, he earned the title of 2021’s “unsung hero,” in addition to receiving the Betty Bruce H. Hoover Award.

Given to the school by an anonymous donor, the Headmaster’s Trophy is annually awarded to a student who best represents the true spirit of Berkeley. It is considered the most distinguished award given to a Berkeley student, and it is for this reason that the selection process involves the entire Upper Division, including student nominations and administration voting.

When asking for nominations, students were asked to consider which of their peers had been the most instrumental in creating the Berkeley community and whose absence among them would make a noticeable difference in the life of the school. Decided by the Upper Division community as a whole, this year’s recipient of the Headmaster’s Trophy was Charlotte Graham ’21.

“I was so excited when I found out I won the Headmaster’s Trophy,” Graham said. “It felt really special knowing that my peers had nominated me, and my teachers had voted for me.”

Participating as a member of the Community Service Council and Student Alumni Relations Committee, along with acting as a tutor and campus tour guide, Headmaster Joseph Seivold stated her name is “synonymous with service.”

“Charlotte has the desire to serve and to serve first, and her natural leadership follows,” Seivold said before he announced her name as the recipient of the award.

Graham’s charitable nature especially shone through during her time at the Berkeley Academy. She created a personal library for all 120 Berkeley Academy scholars, ensuring that each of them received their books, either by personally delivering or mailing them.

“Charlotte is one of the most creative, driven and hard-working individuals that I have ever known,” Emily Sukijbumrung, the director of the college prep program for the Berkeley Academy, said. “Her heart, passion and dedication to excellence truly inspires not only our Berkeley Academy scholars, but every single person on our team.”

With this, Graham was awarded the Headmaster’s Trophy for her benevolent personality and creative actions during the 20-21 school year.

“Berkeley has given me so much; its administrators, teachers, coaches and students have impacted me in countless positive ways,” Graham said. “And I left the awards ceremony feeling happy that I have had a positive impact on others, too.”