Kristen Cleary, one of Berkeley’s English teachers, recounts her experience volunteering in aid of the 9/11 recovery workers

For a brief moment, the once-bustling, lively streets of New York City were completely silent. Police officers draped an American flag over the excavated body, then carried it to the ambulance from the rubble. The vehicle drove silently, in absence of its usual flashing lights and ringing sirens. The only sound heard was the rain beating on the metal of the ambulance.

It was a desolate sight, but one that Kristen Cleary often saw while volunteering during the aftermath of 9/11, a day that resonates with millions of Americans. For six months, 24 hours a week, Cleary and her mother worked with the Salvation Army to help firefighters and construction workers, the heroes of 9/11, clear the site of the fallen Twin Towers. 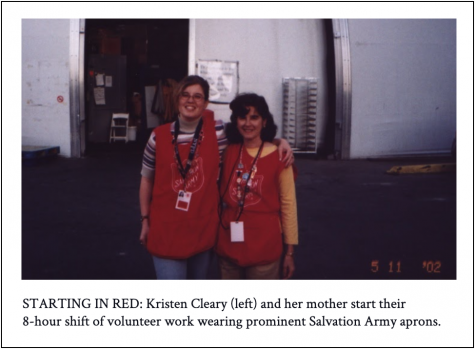 “I felt so powerless, like so many people did,” Cleary said, “We knew we couldn’t help lift steel girders, but I realized there is something that I can do. Even if it was an eight-hour shift of sweeping the floor.”

Cleary worked in a large tent primarily serving meals to the workers. The tent was adjacent to the construction site, referred to as the “pit.” 100 yards away from her was the sheer volume of debris from the towers being cleared by heavy machinery. Meanwhile, workers carefully excavated the remains of a victim.

“I remember standing at the cross once on a break, and there was a group of three or four men working very tightly with brushes and rakes,” Cleary said, “I couldn’t tell what they were excavating, but there was something that they were treating very, very delicately.”

Cleary worked hard to maintain a joyful mood within the tent. She passed out cards from kids thanking the workers and served breakfast, lunch and dinner for weeks on end. From cakes to sushi, the workers enjoyed a variety of food bought from nearby restaurants to help the local economy.

“Only in New York is the relief food sushi,” Cleary said with a laugh, “but of course, it was great. All these guys were working such hard, hard jobs and they’re getting really good food––not just some industrial stuff slapped together.” 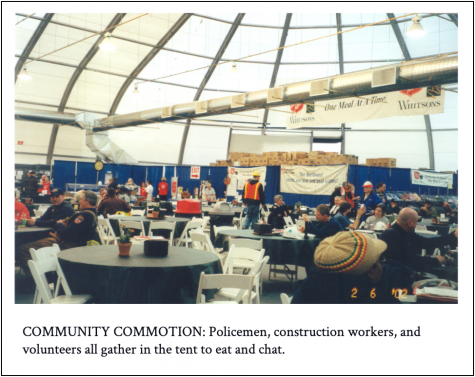 Unfortunately, not every day was lively. Some workers had rough days in the pit and walked into the tent with pure frustration. They either found several bodies in the wreckage or not enough; the workers were so determined to bring as many people home to their families as they could.

Most talked about their agony, but others kept it bottled up. Cleary recalled a young man in his 20s, who eventually gave into the frustration.

“He just exploded,” Cleary said, “in a sort of ‘just leave me alone’ way. It was clear that he had been really affected by what he was doing––it had become too much.”

The workers were not the only ones who were troubled. Some volunteers experienced their own hardships as well. During her time in the tent, Cleary got to know one volunteer in particular: Rosemary, who lost her son during 9/11. She fought her own emotional battle but continued to volunteer. 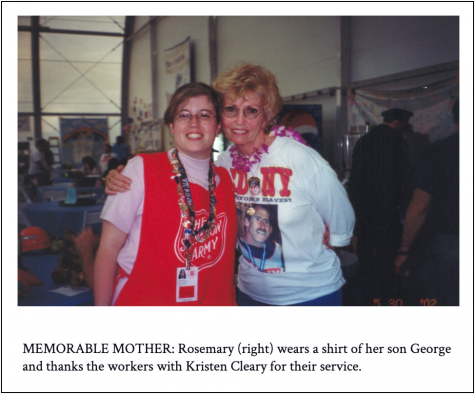 Despite the obstacles faced by both the workers and volunteers, they persevered through––fueled by hope. When asked to recall a memorable detail about her experience, Cleary responded with the Ground Zero cross, which consisted of two steel girders found from the rubble in the shape of a cross.

“Everyone stopped working, and they had the Franciscan priest come to bless the cross,” Cleary said. “It became a multi-denominational symbol as just a focal point for building faith.” 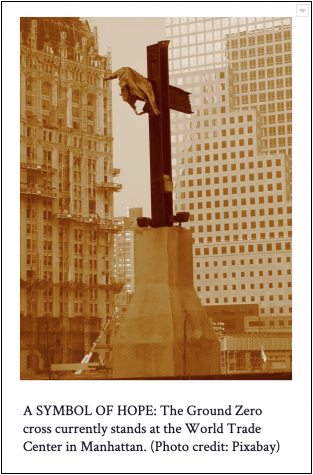 Just as hope and faith were important in the aftermath of 9/11, volunteering to help the recovery workers was important to Kristen Cleary. It was an experience that helped her create bonds with many people and miraculously led her to teach English at Berkeley.

Every year, Berkeley does something special to commemorate 9/11. In Middle Division convocation, students got to hear several teachers share where they were during that day and what they remembered about it. Cleary had a chance to be a part of this Berkeley tradition and share her full story. She hopes she was able to put a personal perspective on 9/11 and get students thinking about the event in a new and different way.

“From a personal point,” Cleary said, “just being a part of something so much bigger than yourself gives you a different perspective on who you are.”