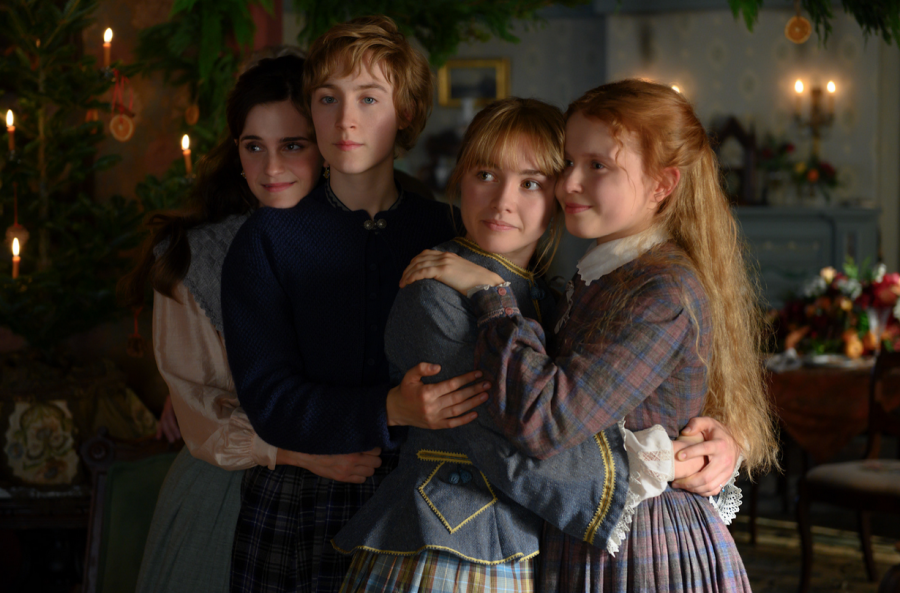 AN ENDEARING ENSEMBLE: Despite being the first film in which any of these actresses worked with each other, Emma Watson, Saoirse Ronan, Florence Pugh and Eliza Scanlen (from left) were able to portray a sisterly bond that was both realistic and spirited.

Since its first volume was published in 1868, and then its second and final in 1869, Little Women by Louisa May Alcott has become a staple of American literature and a commonly read book by many young students. Since its publication in the late 1800s, Little Women has been adapted for the screen throughout the 20th century, and now, the 21st.

Following some iterations of the story in silent film form, Little Women’s first major time on screen was in 1933. Its goal was to ease the pain of the Great Depression and offer a story that resonated and comforted the American public. According to the Washington Post, it also gained much praise for its more family-friendly themes and messages which combated other films of the time that had started to rely on sex and violence to garner an audience. 1933’s Little Women left a great impact on both American people and film by setting a precedent for increased censorship and demonization of the taboo. It would go on to be nominated for Best Picture and win an Academy Award for Best Adapted Screenplay.

Sixteen years later Little Women would be adapted again, this time with young stars, Janet Leigh and Elizabeth Taylor. As noted in an article by The Nation, the main plot had been altered quite a bit to represent certain ideals and sentiments popularized during the time. Similar changes would be made to later adaptations in order for them to use the story to comment on societal issues of their times.

It would take 45 years, however, for a new adaptation to be released, Though Hollywood wasn’t entirely convinced to remake the so-called “outdated” story as many executives deemed it, according to the New York Times, the inclusion of popular actors such as Winona Ryder, Christian Bale, Claire Danes and Kirsten Dunst all helped box office sales. Though some changes were made for a more modern audience, the film, like its predecessors, still kept major plot points and thematic elements.

Though all adaptations have been well received and relatively faithful to the original story, it is without a doubt that Greta Gerwig’s version can be considered the most powerful. Sure my bias for Gerwig’s ability to portray complex and oftentimes destructive female characters may influence this opinion, but it is with her knowledge of these incredibly human intricacies and relationships that make this adaptation stand out.

The first interesting aspect of this film is the narrative style. It deviates from the chronological nature of the book and past adaptations by choosing a more vignette style, grouping scenes together based on thematic elements. While this choice is slightly jarring at the start and might confuse viewers through its fast pace jumps through time, it does slow down to allow the audience to catch up and understand Gerwig’s unique approach. Gerwig also uses it to juxtapose different parts of the March families’ lives, comparing and contrasting certain events throughout the plot.With such a relatively simple story like Little Women and its multitude of adaptations, this style is a refreshing take on such an iconic piece of American pop culture.

One of the greatest parts of this film is the characterization of these iconic characters that both preserves the original character and adds increased depth. Saiorse Ronan’s Jo is magnificently depicted in her stereotypically Jo way: tomboyish, curious, radical and stubborn. In her early life, she demonstrates feminist qualities tied so closely to the character and advocates for a life separate from marriage or any man for that matter. It is as she grows up, however, where both the pressures of society and her own solitude begin to challenge her ideas. As the film reaches its climax, all of these feelings finally culminate into Jo’s final confession of, “I’m so sick of people saying love is all a woman is fit for. I’m so sick of it. But I’m so lonely.” Jo’s confusion surrounding her desires and independence are ideas captured in the original novel but elevated and put into a relatable form through Gerwig’s modern lens.

Amy March, the youngest sister, is also given more depth. Considered to be one of the most despised literary characters by many biblophiles, Amy is typically viewed as childish, immature, envious and even traitorous to Jo because of her relationship with Laurie. 2019’s Amy, however, continues these traits in her earlier scenes but also demonstrates the most growth out of any of the March sisters. Her older self comprehends her place in society, making her a bit more cynical and even hardened. Despite this, she still remains Amy. She doesn’t sacrifice her enthusiasm, wit or passion; instead, she simply grows up. 2019’s version also portrays her as selfless, strong and observant, having her make decisions based on the good of her family rather than her own wants. The main complaint about Amy in this version was that she seemed a lot older than she was supposed to. And sure, it’s hard to imagine Amy being twelve in the earlier parts of the movie as she is constantly played by 24 year old, Florence Pugh, but it’s undeniable to say that Pugh’s acting helped give this historically disliked character a new story.

The rest of the cast are all incredible. Emma Watson’s Meg balances the expectations of society and her own in a very realistic and at times heartbreaking way. Laurie, played by Timothée Chalamet, continues to develop throughout the film, growing for better and for worse through his experiences with the Marches. Eliza Scanlen, Laura Dern, Bob Odenkirk and Meryl Streep complete this superb cast and all help create an experience that builds upon but stays faithful to the original characters.

The technical aspects of this film are also amazing. The use of color expresses the moods, feelings and growth of characters. It also helps decipher which scenes are taking place when by portraying the earlier scenes in more pastel and bright colors and later ones in darker tones. The use of costumes are also able to achieve this effect and demonstrate the personalities of each character. The score, arranged by Alexandre Desplat, aside from just being beautiful also has the ability to remain subtle in some scenes while driving others.

Whether you’re a fan of the original novel, one of the earlier film adaptations, or even a first time viewer of this story, I swear there will be something for you in this movie. The performances coupled with the film’s ambiance and themes create an enjoyable experience that will make this two hour and 15 minute movie seem to fly by but also stay with you. If you’ve already watched it, I recommend reading Louisa May Alcott’s original novel to see how this version differs. A good adaptation of a novel should perfectly balance retaining the original intentions of the story while also modernizing and adapting it to create commentary for the present. Gerwig’s interpretation of Little Women has successfully done this and I can honestly say it has been one of the best film adaptations of a book I’ve ever seen. I’ve already started my list of books she should adapt next!