Behind the Scenes of the Berkeley Broadcast Network

An inside look at the BBN 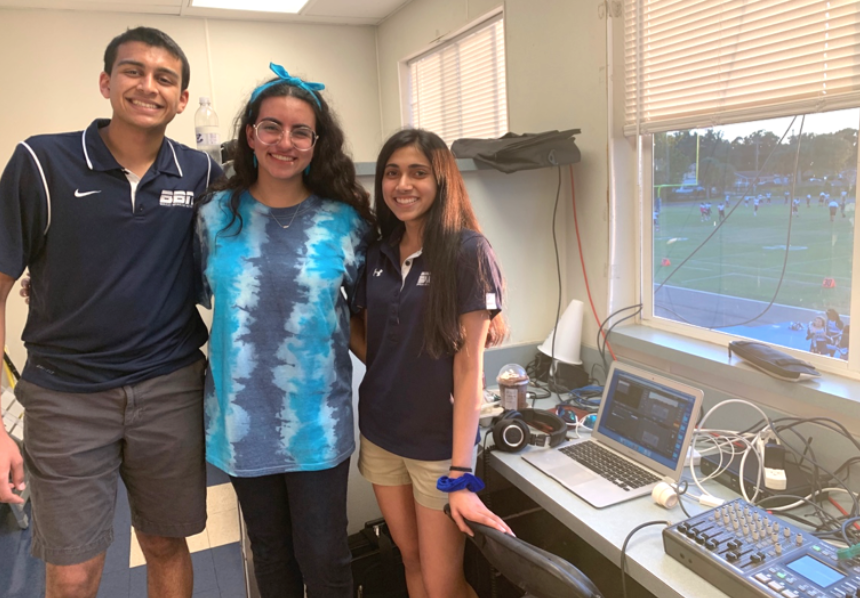 SENIOR SEASON: The Berkeley Broadcast Network’s seniors Raj Ghanekar ’20, Leana Fraifer ’20 and Charvi Sharma ’20 (from left) pose for a picture after setting up for the big homecoming game broadcast.

The Berkeley Broadcast Network, known to students as the “BBN,” is a great resource for any sports enthusiasts unable to watch their favorite Berkeley games live. As a student-run organization, the BBN works hard to make sure their viewers are able to access clear, live footage. With students involved in every step of the broadcast, including filming, producing and commentating, the crew creates professional live stream productions of not only athletic events, but also Lykes stage performances. The dedication and work ethic seen in the press box allows the network to create stunning broadcasts.

Behind the scenes, individuals combine their talent with hands-on experience to bring the game to their viewers. With members ranging from sixth graders to seniors, the students in the press-box are very busy on game days. Those on camera must have a watchful eye, closely following the players with their lenses. The producer is responsible for combining the individual elements of the broadcast, bringing everything together for the viewers. The producer is in charge of switching between cameras, updating the online scoreboard, and managing the commentators. And finally, the commentators help the viewers understand what is occurring on the field by reporting plays and critically analyzing the team’s technique. Raj Ghanekar ’20, a senior BBN commentator, reflects on his experience commentating for the BBN: “There is nothing like describing the action on the field as it is happening, broadcasting a fun game and feeling the energy course through you from the fans in the stands to the people listening.” He hopes to become a professional sports broadcaster one day.

The BBN’s homecoming and senior night game broadcast on October 11th had over 1000 live views across the nation and even a few in Germany. They hope to continue their successes and have an amazing year of broadcasting.

Tune in to watch the BBN’s next broadcast through the Berkeley website! The link is as follows: https://www.berkeleyprep.org/school-life/berkeley-broadcast-network.