An inside look on the Math Club’s success at the MAO national convention. 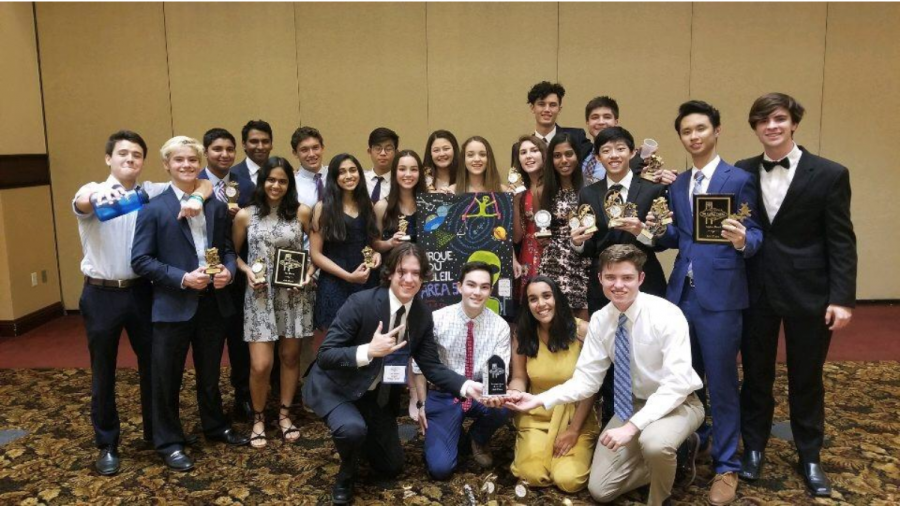 ONE HEARTBEAT: The Berkeley Math Club poses with trophies galore after the final awards ceremony at the Mu Alpha Theta National Convention in Las Vegas, Nevada.

This summer, the Berkeley Math Club flew twenty-three mathletes and two teachers to the Mu Alpha Theta National Convention in Las Vegas, Nevada! With their hard work and dedication, these bright students competed for four days and earned 11th place in the nation, along with many other individual and team placings.

Every year, Mu Alpha Theta hosts one of the largest math competitions in the country. Students have the opportunity to compete in a variety of mathematical topics and activities including giving speeches about math, designing a poster and solving logic puzzles! With 50 schools and over 660 students flying in from all over the country, the Berkeley Math Club competed against some of the top mathletes in the United States. In the end, the Calculus team placed 6th, the Pre-Calculus team placed 6th and the Geometry/Algebra 2 team placed 18th in the nation. Upper Division math teacher, Mike Van Treese, noted that “even though we were in Vegas, we did NOT need luck. Hard work preparing and practicing over the summer allowed our team to come home with our luggage clanging of trophies.”

Along with enjoying these amazing successes, the Berkeley Math Club is proud to say that it’s not just about the math. After those mentally exhausting days of hard work, the Berkeley mathletes enjoyed a relaxing excursion (that they like to call the “Aftermath”) to popular locations nearby. This year, the Aftermath consisted of a trip to incredible sites such as the Hoover Dam, the Grand Canyon, Bryce Canyon National Park and Zion National Park.

The Math Club motto, “One Heartbeat,” really rings true for this remarkable community. Seeing the way the team members truly care for one another, with standing ovations at awards ceremonies and encouraging words of wisdom from the graduated seniors, the future of the club is sure to be bright. Although the school year is just beginning, the Berkeley Math Club has already started preparations for the upcoming competitions, including next year’s national convention in Myrtle Beach, South Carolina!